The wind was up a bit today and that made fishing wide too difficult. We braved the elements and hit the 32 fathom line and grabbed a quick dozen dollies, and then shot back inside the shelter of Cape Byron to avoid the Southerly. We ended up coming home with a great mixed back of 30 odd fish, including one thumping Venus Tusk (Parrot) Fish that went 56cm (Great fish Danny!) Angler of the day goes to Tremayne who was celebrating his 12th birthday with his mum Stephanie. This young man was an absolute gun on the rod, and out-fished everyone on board! We had great fun with heaps of Kingfish about, and even cast to three that followed hooked fish and watched them take the bait, and caught them as well. Congrats to Joe, Tremayne, Stephanie, Callum, Ethan and Danny on a job well done. Hope to see you all again soon. Doug 0400 946 066 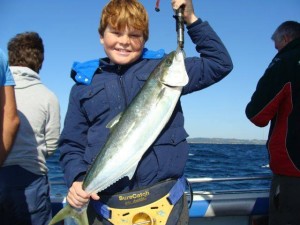